MOAB, Utah – Welcome to the first drive of the 2022 Jeep Grand Cherokee! Hey, didn’t we already do this? Well, yes and no. Jeep launched the redesigned (now with three rows!) 2021 Grand Cherokee L earlier this year. This time, we’re driving the all-new two-row and it’s a 2022. Yeah, sorry. The world is strange.

In short (sorry), you take the three-row L model, hack off a few inches of length and an accompanying 250 pounds or so of mass, and you get the new, standard Grand Cherokee. The longer version is a bit more complicated because a few items weren’t quite ready for prime time when the L landed earlier in 2021, but were once the two-row’s on-sale date came around. The most noteworthy among those is the dash-mounted passenger infotainment screen.

Despite its advanced age, which is a theme when it comes to Stellantis products here in the United States, the outgoing Grand Cherokee was actually a pretty solid entry. As its direct replacement, the new two-row really only had a handful of key bugbears to address. Its interior, while still of decent quality and possessing an excellent infotainment suite, could not hide its ancient design that dated back to the Cerberus era. As a result, it was a step or two behind the Grand Cherokee’s premium SUV aspirations.

We comprehensively discussed the new Grand Cherokee’s interior when we drove the three-row L model, but the two-row arrives with a brand-new party piece: a 10.25-inch passenger-side infotainment screen. Utilizing a tile-style UI, it’s intended to offer entertainment and comfort options for front-row passengers without tempting the driver with distraction. It also includes a few items that Uconnect’s engineers call “copilot” features, such as access to the navigation and camera systems, reducing the passenger’s reach to these controls when called upon to assist the driver.

This, and the available rear-seat entertainment screens, are all Amazon Alexa-enabled and passengers in each seat can watch different programs (or different episodes of the same program). Each position has its own Bluetooth receivers to keep from crossing audio streams. Jeep will not officially confirm that the passenger-side entertainment screen is coming to the three-row L model, but the smart money says it’ll arrive by the 2023 model year at the latest, if not in the forthcoming 2022 updates. 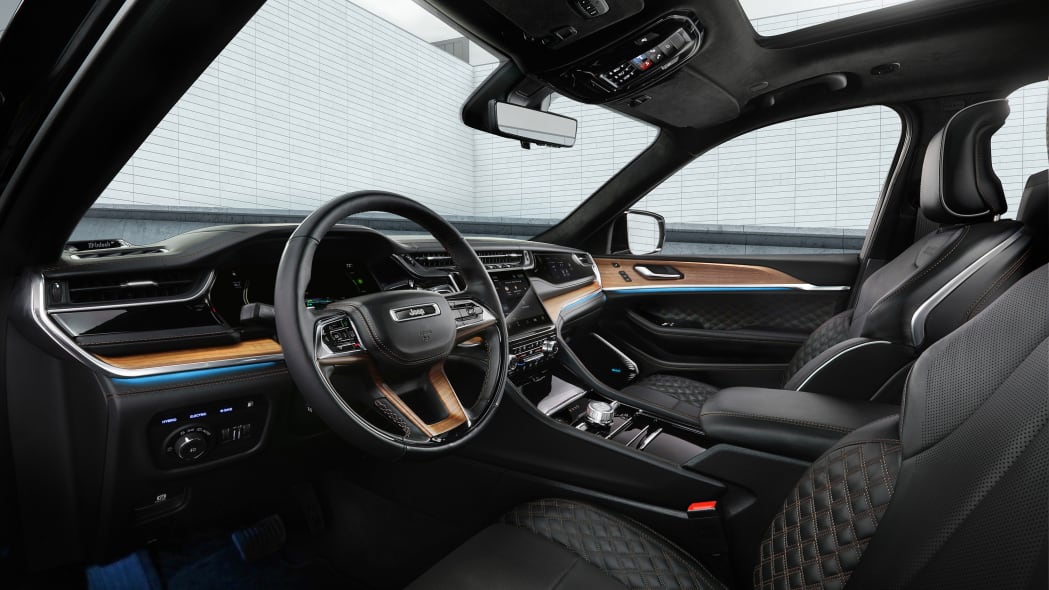 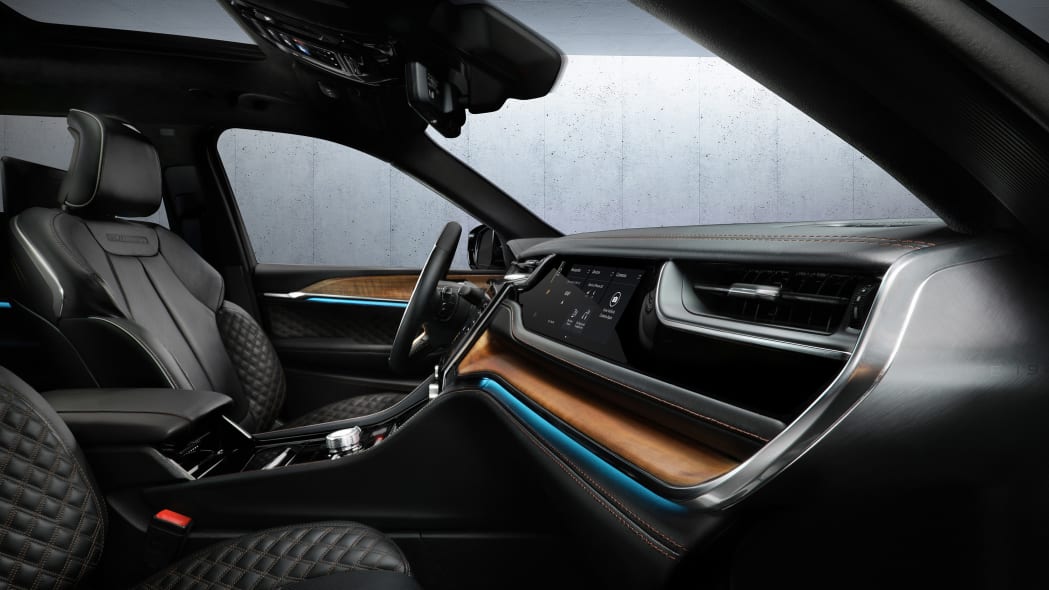 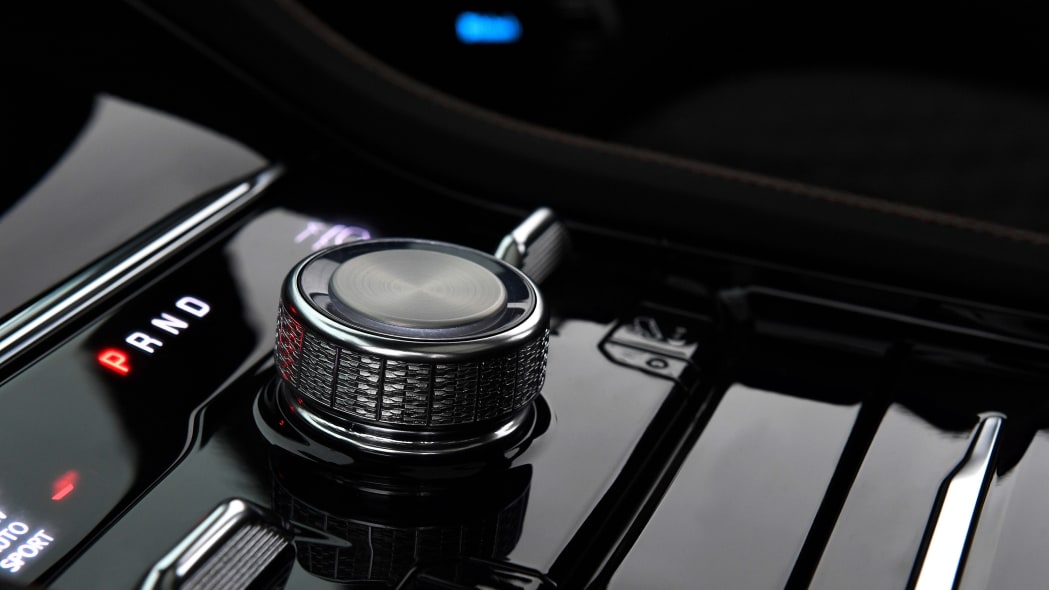 While the dated interior got a major upgrade, the same cannot be said of the dated powertrains. The 2022 Grand Cherokee’s base 3.6-liter V6 and optional 5.7-liter V8 both carry over from the ’21 apart from a trivial reduction in ponies. The Pentastar V6 drops from 295 horsepower to 293 and the Hemi V8 from 360 to 357. Like we said, trivial, and since the car lost about 200 pounds in the generational transition, you won’t miss ‘em. A plug-in hybrid 4xe model is coming with 25 miles of all-electric range, but that’s not yet fully baked.

While the Grand Cherokee relies on the tried-and-true, car-based SUV formula that is now employed pretty much universally throughout the industry (aka crossover), Grand Cherokee’s rear-wheel-drive layout is bit of an outlier. Its age-old nemesis, the Ford Explorer, would be the other rare example of a non-luxury, RWD SUV with crossover architecture. That’s closer in size to the Grand Cherokee L, however, and all else being equal, the two-row’s FWD-based competitors have a packaging advantage in terms of passenger and cargo room. Despite being shorter in both wheelbase and overall length, a Honda Passport offers a slightly roomier front seat and more cargo volume behind the second row, for example.

There is another RWD-based competitor, of course, but the Toyota 4Runner sticks to body-on-frame construction to lean more heavily into its 4×4 persona. The Grand Cherokee’s mission is oriented more toward on-road luxury than off-road prowess. While that may sound odd for a Jeep, it’s nothing new for Grand Cherokee. Unlike the Wrangler and Gladiator, which get locking rear (and front on Rubicon) differentials, the Grand Cherokee stops at a limited-slip rear axle and brake-based front differential.

For the on-road portion of our drive, Jeep set us up with a V6-powered Summit Reserve model. Apart from the engine, this is about as loaded as it gets. Uconnect 5 pairs brilliantly with the optional McIntosh audio system. Granted, you’re paying a lot for a Grand Cherokee with this system (it’s optional on Overland and Summit models, and standard on Summit Reserve), but it’s as good as you’ll find in the mainstream market. High-quality audio files sound excellent; low-quality sources are cleanly processed, and while even McIntosh can’t save satellite radio from itself, it could be a lot worse. Wireless smartphone integration is dirt-simple to set up too.

The Grand Cherokee’s available air suspension has five available heights. Standard (8.4 inches off the ground) is dead in the middle and the default setting for the Auto drive mode. Sport mode drops the height slightly but firms up the springs, letting the Grand Cherokee hunker down a bit. There’s a noticeable improvement in responsiveness at little expense in comfort. In fact, if it weren’t for the powertrain calibration included in Sport mode (the constant high revs are a bit much), this would be a perfectly fine everyday setting for anybody who doesn’t regularly contend with pockmarked road surfaces. 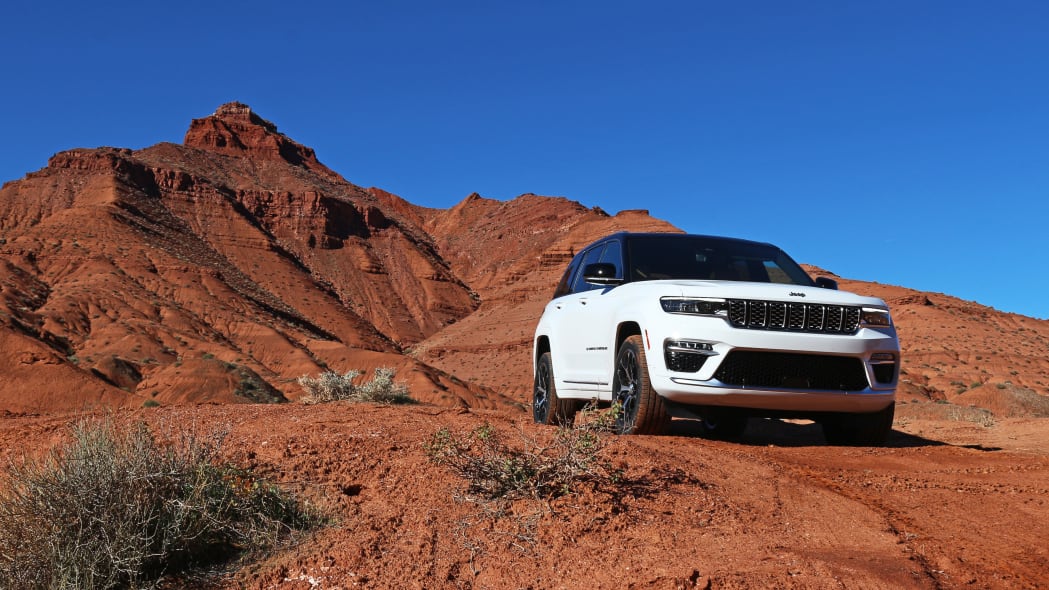 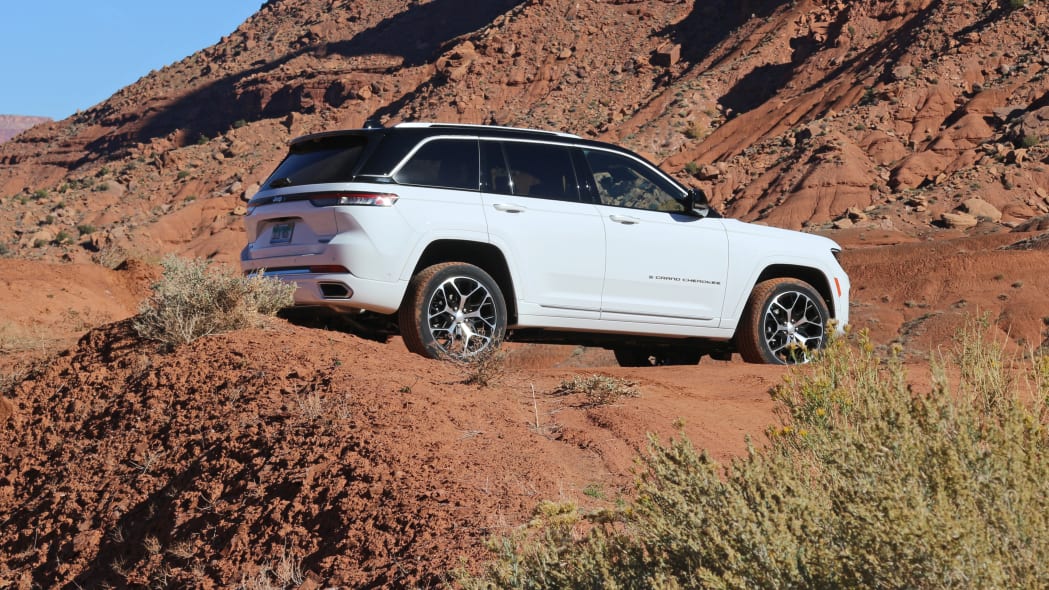 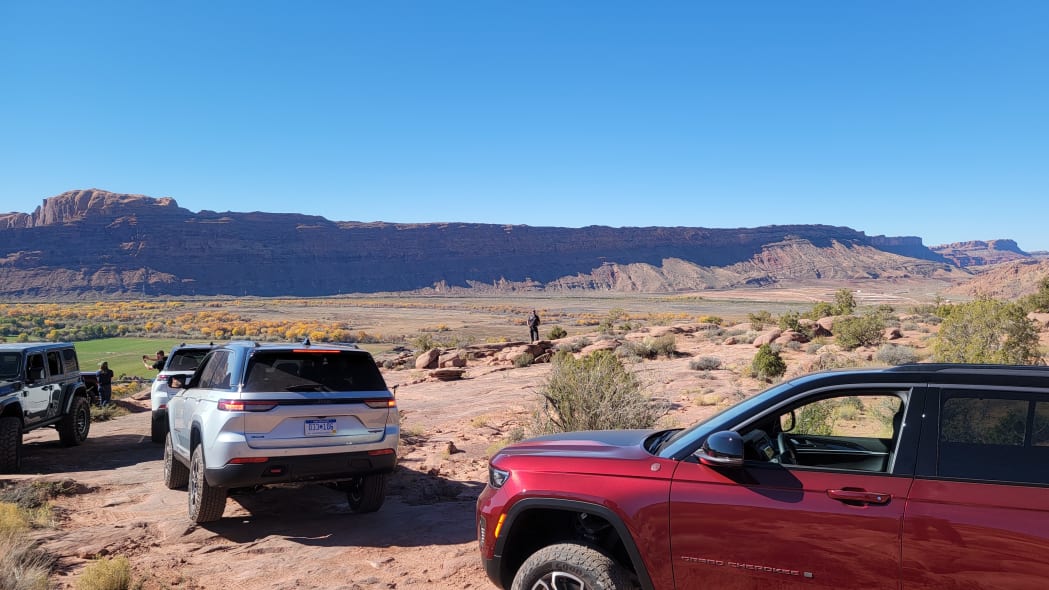 Even when living in the “Sport” end of the rev range, the V6 offers merely adequate power. It’s perfectly adequate for the midsize SUV class, but it’s not remotely invigorating. By contrast, the 5.7-liter Hemi certainly sounds the part and pulls like a freight train on the highway. It makes for a better cruiser and gets you another 1,000 pounds of towing capacity (7,200 vs. 6,200), but the iron block V8’s considerable mass makes itself known.

This brings us to the two-row model’s other edge over the three-row L: Trailhawk. It’s to Grand Cherokee what Rubicon is to Wrangler and Gladiator. This is the model that really earns Jeep’s “Trail Rated” badge. Trailhawk models with the V6 and V8 get an extra 0.4 inches of ground clearance at the air suspension’s max height setting (topping out at 11.3 inches). Trailhawks also get the most robust of the Grand Cherokee’s three 4×4 systems, incorporating a two-speed transfer case with a 2.72:1 low-range ratio.

Altogether, its maximum approach angle improves to 35.7 degrees, breakover angle to 24.4 degrees and departure angle to 30.2 degrees vs. 30.1/24.0/30.2 for the air suspension on the Overland (the Summit has a slightly worse approach), and 20.5/19.1/26.6 for those equipped with the standard multi-link steel suspension. Since they come with both the brake-based biasing and upgraded rear differential, Trailhawk models can put as much as 100% of available torque to the front or rear. Of that, it can then vector as much as 100% to either rear wheel or as much as 85% to either front wheel.

To show off all this tech, Jeep took us up to Raven’s Rim, a private trail perched above downtown Moab. Our small parade of V6-powered Trailhawks wound up through the switchbacks and were guided over a reasonably technical series of boulders and washes, alternating noses and tailgates in the air over the trickier bits. It was far more strenuous than anything a typical owner would ever do with their Grand Cherokee, but it was Jeep’s chance to show off just how capable its midsizer is even without the benefit of locking differentials. 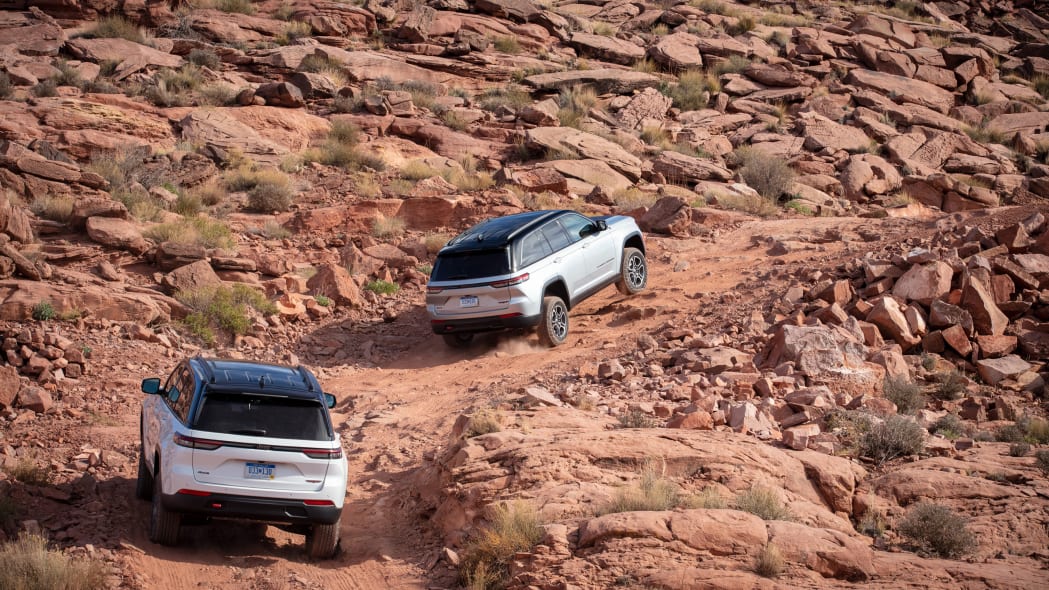 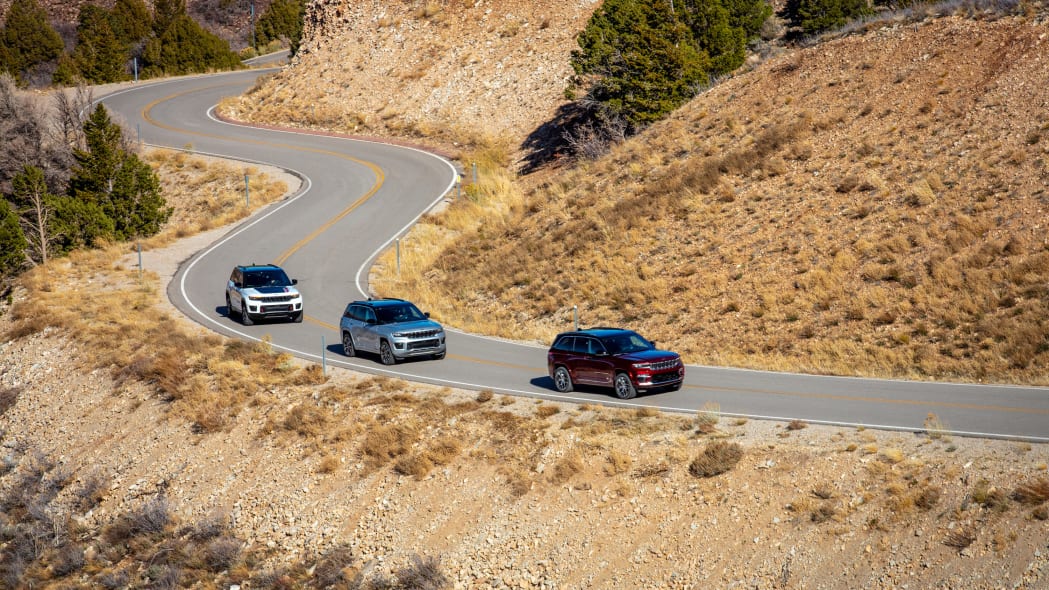 And as cool as the electronic sway-bar disconnect is, the real hero here was the Grand Cherokee’s front-facing camera, which can be accessed from the app screen in Uconnect. It completely eliminates the hood as a blind spot, removing guesswork from the equation in tight spots and blind crests. As with any digital visual aid, it alters the perspective slightly and can remove some fidelity and depth, but it beats the heck out of educated guesses. And while few will need the Grand Cherokee’s full range of suspension articulation on their daily commutes, that same camera is just as capable of revealing a misplaced tricycle that is about to meet its doom beneath the wheels of your shiny new Jeep.

Note the prices listed are for the base model of each trim. Adding 4×4 to V6 models costs $2,000 and the premium for the V8 where available (Trailhawk, Overland, Summit, Summit Reserve) is approximately $3,300. Jeep has not yet released pricing for the 2022 Grand Cherokee L, so we’ll have to wait and see how that shakes out before drawing any further conclusions.

The 2022 Jeep Grand Cherokee is an almost 50/50 blend of the new and familiar. The tech, interior upgrades and weight loss are all welcome advances — the new. The powertrain, however, strikes us as dated. It’s familiar and functional, but it’s not exciting and it doesn’t move the ball forward. Yes, yes, the upcoming 4xe is and it will. That’s great. In fact, even without driving it, we’re prepared to say that it’s probably the one to buy unless your most significant occasional-use case is towing (its rating is overshadowed even by the V6). But for now, these aging ICEs are snoozers.

Fortunately for Jeep, the real story is inside the cabin, and we’re pleased with the narrative. The improvements are not nearly as dramatic as those Ram achieved with its half-ton redesign, but as reasonable as the Grand Cherokee’s premium proposition was before, it’s far more convincing with the latest updates. And you can already super-size it to boot. What’s not to like?

Watch the 2022 Jeep Grand Cherokee tackle on- and off-road driving:

2023 BMW iX Review: The beauty is on the inside